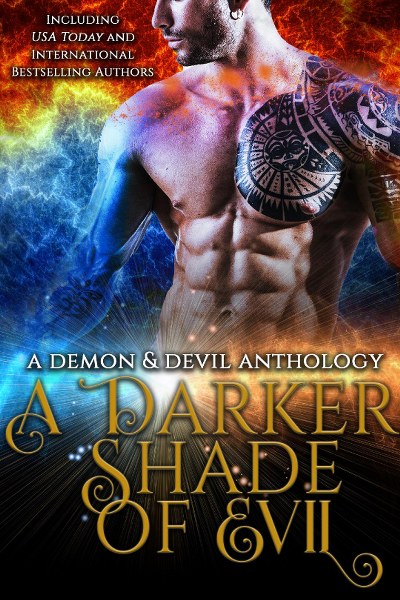 A Darker Shade of Evil
A Demon and Devil Anthology
Genre: Paranormal Romance

PLUS 12 FREE Books!
Compliments of the Authors of A Darker Shade of Evil
with Proof of Purchase!
Add to Goodreads * Books2Read Buy Links

FOUND ONLY IN A DARKER SHADE of EVIL

A Darker Shade of Evil

Dead women, all young and beautiful, are popping up all over the city in various states of decomposition…missing some shocking body parts.

Detective Brock Hanley takes the case, determined to find the murderer. He has no idea whom or what he’s facing.

Then, she walks into his life. Sapphira Leash.

Half beauty queen, half tigress…all misanthropist, and more than just curious about his haunting new case.

Why she hates the world is a puzzle. Maybe she just hates men, or maybe it’s just Detective Brock Hanley. How can a long-legged temptress with an attitude help him solve these murders? Sapphira has connections of the darkest kind, and a seasoned detective’s eye for violence and murder. If she defies her golden rule – never get involved – Hell could land at her doorstep – literally.

She has a secret, a big one, and the closer Brock Hanley gets to Sapphira Leash the harder it is for her to resist having sex with him…or killing him.

A Beautiful Gift
Chapter 1
“Where?”

“Under the west pillars of the Golden Gate Bridge in the swampy marsh and fetid pools of saltwater left by the receding tide. She’s been ravaged, first by her assailant then by nature.” The first responder on the scene replied as he wiped his face and mouth with a handkerchief.

“I don’t want her mother to see her like this. The torture of losing her daughter is one thing to live with, but this? This is torture; it’s cruel. Jesus Christ, looks like we’re gonna need dental records to ID her.” This wasn’t Drew Loverhood’s first murder scene, but it was gruesome and ranked right up there with one of the worse.

“You’re right. She should imagine returning her daughter to God the way He sent her to live with her Mother.”

“Yea…I got daughters…I threw up when I saw her — I marked off the spot so CSI wouldn’t mistake it as evidence. Sorry. She can’t be much older than my girls, maybe twenty…twenty-five?”

“Yea, I would guess. Has the ME been called? We really can’t touch her until she’s through with the initial examination. Expand the restricted area. I don’t want the press to secure any drone photographs. I want her Mother to remember her as she was in life — joyful, sweet, pure — a beautiful gift.” Detective Loverhood sighed and shook his head.

“Yea. Christ, where is Hanley when you need him…” Loverhood said to no one under his breath

“I think he took early retirement and is somewhere in the Rockies, sir.”

“Jesus, Tank! Don’t you think I know that? He was my goddamn partner for a decade, right after I got my gold shield.”

“You’re doing a lot of ‘sorry’, Tank. Pull yourself together. Wait up by the demark line for the ME and get her down here without any fanfare, will ya?”

“‘Detective Lover’ to you, Tank.” Loverhood didn’t want to bust the guys balls. This was an especially nasty scene. Har for anyone, especially a guy with daughters. We see it every day, but it doesn’t get any easier when the face you see, you imagine is one of your own.

Dr. Celecia Farmer was walking down the hillside below the bridge with her investigator. As she walked, she was putting on rubber gloves.

“Pretty self-explanatory, Doc. Young woman, twenty to twenty-five…maybe a hundred and ten pounds, Caucasian, auburn haired. Doesn’t look like a runaway or a hooker, she has a manicure and pedicure. Not much else I can tell without moving her, which I didn’t do, but she is dead.”

“Yes, I can see that from here. Tommy, get some photos, please, before I get in there to take a closer look.”

“Right now, you don’t want to know what I think because what I think doesn’t matter. It’s what I know that matters.”

“You always so ‘by the book’, Doc?” Loverhood knew what he thought but he hadn’t said a word out loud to anyone. He didn’t like where this was going already and the quick conclusions he drew, based on a decade of experience, wasn’t good for anyone. This was going to be a long one, Loverhood already knew that. And messy. He sure wished his partner was here working these cases with him, but he was sure he wouldn’t comeback even if he called him. Or begged him.

Ever since his wife and daughter were killed by a nutcase with a death wish and driven by revenge, Detective Brock Hanley had retired to higher ground. He never wanted to see another bridge, especially not a “golden” one. Lover called him a couple of times a year on special occasions or to ask him about a case or something superficial, but conversations were stilted and awkward, even for as long as they’d know each other and as close as they once were. It was hard, hard to pretend that something precious hadn’t died in him when “his girls” died.

He was a zombie. He had no more to give to anyone because nothing mattered to him. Lover was beginning to think he was just waiting to die himself so he could see them again.

But they both knew that when their numbers were up, they wouldn’t be going to the same place—not after what they both had seen and done. Especially what they had done. They had done things they would never want their wives to know about, walked that fine blue line, the one between legal and downright sinister. Law and order was never pretty and Lady Justice wasn’t blind, she wasn’t fair or just, she was moot. She was a co-conspirator, plain and simple. And she took all she could out of Detective Brock Hanley when she took the only people he ever loved.

“Yea, Doc. Sorry…” He sighed in the face of yet another death, another gruesome, cruel, sadistic death of a beautiful child ripped from a bright future and family that would never be or be the same.

“Listen, I am done here, for now. I can’t tell you much other than this is a suspicious death. She has marks around her neck and petechial hemorrhaging. There are no other marks, abrasions, lacerations, bruises or contusions so she wasn’t dropped from the bridge or down the hillside. And she is missing some vital body parts, but I’ll know more when I get her on the table. I can tell you that ToD was between midnight and six this morning based upon her liver temp and lividity. It could be a sex crime or something more sadistic and sinister. Like I said, I’ll know more when I open her up.”

“I would guess about four to six hours. It was after high tide, though, I can tell you that otherwise she would be all beat up by the surf and there might not be much of her left from the marine life. I will add, though, that she has been ravaged by someone or something.”

“So, how’d she die, Doc, strangulation?”

“Cause of death could be from any one of a number of manners of death. Could be strangulation, drowning, or she might have bled out.”

“Well, Lover, you were busy collecting evidence when we rolled her over. She has a pretty nasty horizontal incision in her lower abdomen. Looks like she is missing something from the inside.”

“I am not positive, but it looks like she was either pregnant, maybe not, but they took all her reproductive organs, from what I can tell. So, there could’ve been a baby involved or they just wanted her organs. I can’t know until get in there and the toxicology comes back in about three weeks.”

“Three weeks? We can’t wait that long for the toxicology. We need to know if she was drugged and murdered for her baby or her organs. Either way, there’s some sick fuck out there and we must stop him as fast as possible. Keep this under wraps, Doc, we don’t want to start anything we can’t control with the women in our city.”

“You may have to stop them. There could be more than one sick fuck out there.”

**scroll through the slideshow to find out more about the authors!!**